Norbert Benedict Hamilton Jr. was born on September 6, 1917, to Norbert Hamilton and Helen Hamilton who lived in West Chester, Pennsylvania. Norbert was one of two children. He attended Friends Community School in West Chester.

Norbert graduated from Dartmouth College, in Hanover, New Hampshire. After college, he returned to live in West Chester. He enlisted in the Army shortly after our country was attacked at Pearl Harbor. Norbert entered service as a Private and received basic training and advanced engineer training at Camp Butner, North Carolina. He was then commissioned as a Second Lieutenant (considering his College Education), and later promoted to First Lieutenant. On one of his furloughs, he visited his uncle John V. Gibney who was then the proprietor of Lenape Park. 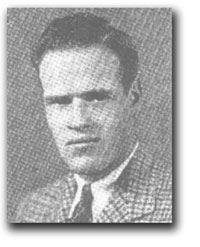 Norbert was sent overseas to the European Theater of Operations in January, 1944. He served with Company I, 180th Infantry Regiment, 45th Infantry Division. First Lieutenant Norbert Hamilton Jr. was Killed In Action in France on August 15th, 1944.  He was buried at the Rhone American Cemetery in Draguignan, France.    Norbert was awarded the Silver Star, our Country’s third highest award, the Infantry Medal for exemplary conduct in Action (in an earlier battle), as well as the Purple Heart. His Silver Star Citation reads:

The citation blanks out the location, but the 45th Division history lists Ste-Maxime-sur-Mer, on the southern coast of France on  the Mediterranean Sea, as the location Division’s command post on August 15th.