Joseph A. Kacanda was born on March 1, 1920 to Anthony and Johanna Kacanda who lived in Phoenixville, Pennsylvania. Joseph was the third of five children. His parents emigrated from Poland in 1910. Joseph attended Phoenixville High School. He was a member of the Sacred Heart Church. He worked for a time at a local cigar store, then for the Phoenixville News Agency.

Joseph entered service in the Army, and after basic training was assigned to serve with Battery A of the 107th Field Artillery, of the 28th Division, Pennsylvania National Guard.

The 28th “Keystone Division” was ordered into Federal Service in February,  1941.  Hero Morton Talley served in this same division. Joseph’s division deployed to the European Theater of Operations in October 1943, for more training preparing for the liberation of France. 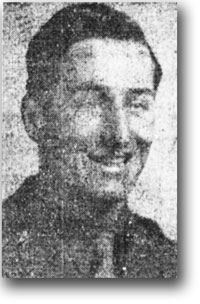 In July, his division landed at Normandy among the first landings on D-Day, June 6, 1944. The division slowly advanced across western France. French hedgerows permeated the area. They divided numerous small fields, and consisted of thick hedges planted on top of earthen and stone walls 4-10 feet high. Allied troops crossing the open fields were often mowed down by crack German troops who were well concealed in the thick hedges, and who had their guns and artillery zeroed in to markers. Each hedgerow became a battle in itself, with very heavy casualties. Again, American innovation shone – later in the battle, an American Sergeant came up with an idea. He improvised, using scrap metal to form a type of toothed plow which he welded onto the front of a tank, to plow through the hedgerows.  Private First Class Joseph A. Kacanda was Killed in Action on August 15, 1944 in St. Lonlay L’Abboye, France. He was buried at a local military cemetery, with full honors. In 1948, Joseph’s remains were returned for burial in his home country, aboard the Army Transport Barney Kirschbaum (which also returned the remains of hero Fred Manship). High Requiem Mass was celebrated at the Sacred Heart Church, followed by burial at their cemetery with full military honors. His brother, John, also served in the Army.

Soldiers battling through the hedgerows in France during World War II