William Wesley Lammey was born on May 28, 1920 to Robert and Miriam Seiders Lammey who lived in Coatesville, Pennsylvania. William was the oldest of five children. During the Great Depression, the family lost their home, and moved from house to house, often having to rent smaller homes. William lived with his grandparents who operated a home laundry business, well known in Coatesville.

William obtained employment at Lukens Steel, working in their machine shop. He was engaged to Violet Shade, a nurse who worked at Coatesville Hospital.  William was a prominent baseball player and started a baseball team called the Atigens.

William was drafted into the Army Air Corps in April, 1943. He received basic training, and additional training as an aircraft ground crewman in New Cumberland, PA; Atlantic City, NJ; and was stationed in North Dakota and North Carolina. William was assigned to the 710th Training Squadron. The 710th became a part of the 447th Bombardment Group. William talked often of his desire to transfer to flying duty. 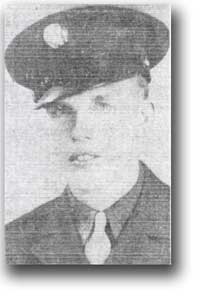 Corporal William Wesley Lammey Died Non Battle in an aircraft crash over Corsica, on August 17, 1944. His mother received a War Department telegram on Thursday, August 31st, that their son was fatally injured. A memorial service was held on September 10, 1944 at the Lutheran Church of Our Saviour. He was buried at the Sicily-Rome American Cemetery in Nettuno, Italy, where Hero Charles Henck was buried.  In 1948 William was disinterred to be repatriated to his home country. Services were held at the Gensemer Funeral Home. William was buried at the Fairview Cemetery. William’s brother, Kenneth served in the Navy. His brother Robert served in the Army and was a prisoner of war, captured by the Germans.