Leo J. Patton was born on February 1, 1924 to Harry and Bessie Patton, who lived in Modena, Pennsylvania. He had 7 siblings. Leo married Erma Dracher and they continued to reside in Modena.

Leo entered the Army on June 17, 1943 and received training at Camp Croft, South Carolina. He was able to visit home on leave before reporting to Fort Meade. He was sent overseas to the European Theater of Operations in December, 1943 and was assigned to the 15th Infantry Regiment, of the 3rd Infantry Division. Leo served in combat in the French, North African, Sicilian, and the Italian campaigns.

Leo was wounded in action on January 22, 1944 at Anzio and evacuated to a British hospital ship, the St. David.  The St David was one of three British hospital ships off the beachhead that was attacked by German bombers on February 24, 1944. There were 226 people on board, including both medical staff and patients - only 130 survived. Leo did not survive. His family received a series of confusing letters - the first one came on March 28th stating that Leo had been wounded. On June 13th, the family received another telegram stating that he was missing in action when the hospital ship was sunk: 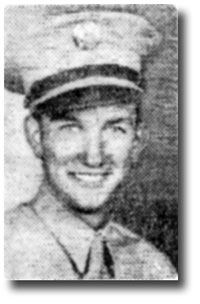 I am writing you concerning your son, Private Leo J. Patton, who has been missing in action in the North African area since January 24, 1944.

A report has been received in the War Department which discloses your son was a passenger on board a hospital ship en route to North Africa, when the ship was attacked and sunk on January 24th.

A final telegram was received by his parents on October 4th:

The War Department has received an official report that establishes the fact that your son was killed in action on January 24 when the British hospital ship on which he was being evacuated from the combat area was attacked and sunk near the coast of Italy by enemy aircraft.

Leo is remembered on the Tablets of Missing in Action or Buried at Sea at the Sicily-Rome American Cemetery, in Nettuno, Italy.

Leo's brother, Hero Clarence Patton was also killed in the war, as was his cousin, Hero Paul Howett.