Aaron Franklin Slonaker, Jr was born on February 15, 1926  to Aaron Franklin and Jennie Riley Slonaker who lived Phoenixville, Chester County.  Aaron was one of four children.

Aaron completed one year of high school before going to work as a farm hand - most likely to help support his family.

Aaron entered service in the Army on April 6, 1943. He served with C Company, 309th Infantry Regiment  78th Infantry Division. The 78th embarked for the European Theatre of Operations on October 14, 1944 and arrived in England 12 days later where they received more training before crossing into France on November 22, 1944.

Aaron is buried in the Morris Cemetery in Phoenixville. 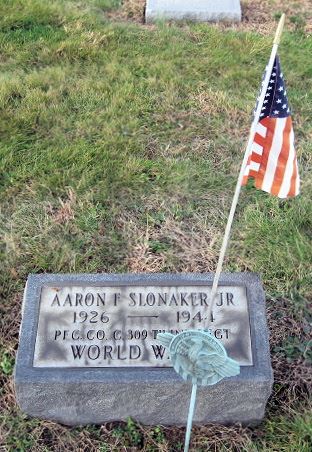