Willis Neuhauser  Stoltzfus was born on February 9, 1923 to Eli and Ida Stoltzfus of Phoenixville, Pennsylvania. He was the younger of two children. His father, Eli, was a proprietor of an auto repair shop, and later became a school director.

"A man may be known by the associates he keeps,” so that places Will in a rollicking crew of pleasure-lovers and fun-seekers. One of our milers on the track team, this chap has a decided tendency toward verbosity.

Willis graduated in 1940 and then worked for the BF Goodrich Company in Oaks. In June, 1944, Willis married Betty Keyser from Oaks.

Willis joined the Army Air Forces in November, 1942, and qualified as an Aviation Cadet in February, 1943. He received pre-flight training at Marietta College, Ohio. He received training at various Army air force fields in Florida, Alabama and Louisiana. He received his commission as 2nd Lieutenant at Blytherville, Arkansas in April, 1944, with his “Silver Wings”. He was then qualified to pilot twin-engine aircraft. 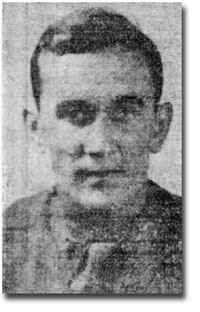 Willis trained to fly a four-engine B-17 Flying Fortress bomber. After additional training, he was sent overseas to the European Theater of Operations in September, 1944. Willis was assigned to fly as a co-pilot with the 364th  Bomb Squadron of the 305th Bomb Group, stationed at Chelveston Airfield in Northaptonshire, in southern England. Lieutenant Willis N. Stoltzfus was Killed In Action on January 10, 1945 over Germany. His wife received the fateful telegram on January 31st.
Willis received the Air Medal with 2 Oak Leaf Clusters (in lieu of two additional medals) as well as the Purple Heart posthumously. The accompanying citations reads:

For meritorious achievement while participating in sustained combat operation over Germany and German occupied countries. The courage, coolness and skill displayed by this officer upon three occasions reflect great credit upon himself and the Armed Forces of the Untied States.

Willis was buried in a local military cemetery. At the request of his family, he was brough home for burial in his home country in 1947. He was transported across the Atlantic on board the Army Transport, Joseph V. Connolly, which carried the bodies of 6,251 of our heroes.  A private funeral service was held on November 6, 1949. Interment was at the Green Tree Cemetery, in Oaks.