William Charles Taylor was born on December 10, 1924, to Joseph and Dora Taylor in Philadelphia. William was one of six children. His parents moved to West Chester when William was very young.

William graduated from West Chester High School in 1942. His yearbook says, “Although Bill is very quiet, he is friendly and a good student.  His favorite saying is “Oh Boy” and he spends all his spare time in working with wood or on his automobile.”

William applied for admission to the Williamson Trade School and was accepted. The school was established “to provide financially disadvantaged young men with the opportunity to become productive and respected members of society.” William attended the school, studying the trade of Carpentry and graduated in  1945 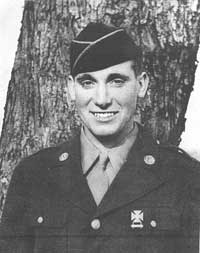 After a three month whirlwind romance, and with the blessings of their parents, William married his sweetheart, Elmira Davidge who was attending high school in Avondale. They were married on September 22, 1943, and his bride moved to live with William’s family in West Chester. Many couples married before the one left for war. William had received his draft notice and wanted to marry his sweetheart before he left. Two days later, on September 24th, William reported for induction into the Army. William received basic training at Camp Wheeler, Georgia, and was then sent to Fort George Meade in Maryland for additional training. On February 22 he was shipped overseas to Italy. William served in a rifle squad in a service company, in the Fifth Army commanded by General Mark Clark. The Fifth Army was involved in attacking the German Gustav Line about 80 miles south of Rome. This heavily fortified German defensive line ran east to west across Italy, and was anchored by the Monte Cassino, a fortified hill 1,700 feet above sea level. The plan was to attack Monte Cassino across the Rapido River, while Allied forces staged an amphibious landing at Anzio behind enemy lines. In January the 34th Infantry Division of the 5th Army attacked Monte Cassino. The fighting was intense, both at Anzio and Monte Cassino and little progress was made.  In February, the 34th division was pulled back due to exhaustion and heavy casualties and replaced with fresh New Zealand and Indian divisions, but they too suffered heavy casualties. These divisions were withdrawn for regrouping. Finally, the entire area was pulverized by heavy bombing, destroying the historic Monastery at Monte Cassino, in February. Still, the battles raged on into May. It was in the midst of this raging battle that William arrived and reported to the 5th Army Replacement Depot possibly in Caserta, then one of their divisions. On May 16, 1944, Private William Taylor was killed in action in Italy during a mopping up operation, just two days before Monte Cassino was finally captured. William was buried in a cemetery in Italy. After the war at the family’s request, he was returned home for burial in the family plot at Green Mount Cemetery. His wife, Elmira, became one of the youngest war widows in the county, at sixteen years of age.  William’s brother, Joseph, served in the Army in the War. William’s classmates at the Williamson Trade School honored him on a bronze plaque, located in the lobby of the main building. The plaque is placed on a wall, which they call their “Wall of Heroes,” on which is displayed plaques honoring students from various classes who made the ultimate sacrifice during World War II, Korea, and Vietnam. There were two students named from the Class of 1945. The Plaque reads:
“Erected by the Class of 1945 in honor and loving memory of the classmates who made the supreme sacrifice in World War II”. 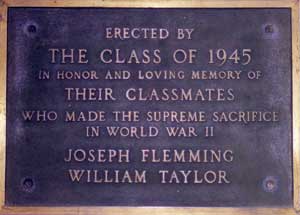 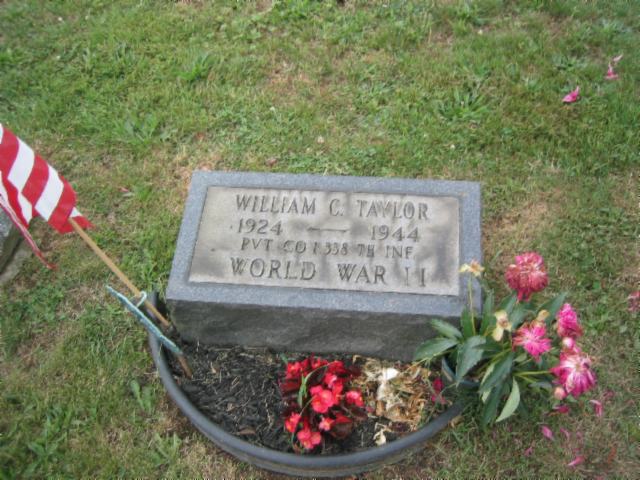