Clemence C. Whipple was born on October 4, 1910 in Manchester, Oklahoma to David and Sally Ann Whipple. He was one of five children. The family moved to Pennsylvania in 1930.

Also in 1930, Clem enlisted in the Marine Corps and served for four years. He was honorably discharged in 1934. For at least part of that time, Clem was stationed at Quantico, Virginia.

According to records, Clem was married briefly to Mary Elsie Lee Christopher between 1934 and 1938.Upon his discharge from the Marine Corps, Clem was employed as a milk dealer with the H.A. Hamilton company in Penn Lyn, Pennsylvania. In 1936, he went to work for Willow Ridge Dairy Farms in Willow Grove, PA. 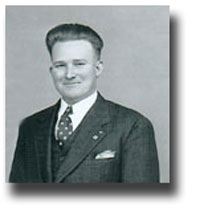 In November 1939, Clem remarried. He and his new bride, Laura M. Booth, moved to Phoenixville, PA. Laura obtained employment at the Thomas F. Byrne Corporation on Morgan Street which was a silk manufacturer. Clem worked on the Androssan Dairy Farm in Wayne. They attended St. Peter’s Episcopal Church. After the U.S. entered World War II, Clem re-entered service in the Army in April, 1942. Records indicate that Clem was employed as the foreman of an automotive shop at this time. After basic training, he was sent to Fort Knox, Kentucky for armored training. Clem was assigned as a tank driver for the 701st Tank Destroyer Battalion. Tank Destroyers were armored vehicles with a very heavy cannon designed to counter the heavy German tanks. The earlier version was the M3, a converted armored personnel carrier modified with a 75 millimeter gun (about 3 inches). Later versions were constructed from a tank chassis. Clem visited home on an eight-day leave in August, 1942, and was shipped overseas to the European Theater of Operations in September. Clem’s battalion was sent to North Africa to help the British liberate the countries invaded by the Germans, under the leadership of the legendary German commander, Rommel. American Forces began landing in West Africa – Algiers and Morocco on November 8th. Private Clemence C. Whipple was Killed In Action on November 10, 1942 in North Africa. He was awarded the Purple Heart and is buried at the North African American Cemetery in Carthage, Tunisia.