Nicholas Antonucci was born in Italy on November 6, 1920 the only child of Peter and Theresa Antonucci. Nicholas immigrated to the United States in 1939, and stayed with his godfather’s family Camille and Henry Marinano in Coatesville, Pennsylvania. The Marinanos sponsored Nicholas’ immigration.

Nicholas obtained employment at a shoe repair shop owned by a friend in Reading.

Nicholas enlisted in the Marine Corps on July 29, 1943 and after basic training was shipped to the Pacific Theater of Operations.

Private First Class Nicholas Antonucci was Killed In Action on June 16, 1944 in Saipan. His adopted family received the government telegram on  June 29th and were grief-stricken. They had recently received a letter dated May 12th from Nicholas telling them he was all right and not to worry.

Nicholas’s remains were returned after the war for burial at the Baltimore National Cemetery. 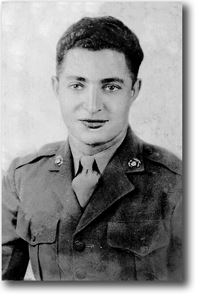