Harvard Graham Fox was born on January 30, 1922 to Raymond and Sara Fox who lived in Rock Run (near Coatesville, Chester County). Harvard was one of seven children.

Harvard graduated from Scott Senior High School in 1942. He was a popular student and had a wide host of friends in the community.  After school Harvard worked in the composting room at the Coatesville Record for a year prior to his enlistment.

Harvard enlisted in the Marine Corps on July 3 1941. He received training at Quantico, Virginia, and New River, North Carolina. He returned home on furlough to visit family and friends. Remembering his visit they wrote:

“Visiting the newspaper office when home on his last furlough, he described life in the Marines, which he looked upon as the crack organization of the several branches of service. With accustomed modesty he displayed the medals he was awarded for pistol and rife sharp shooting.” 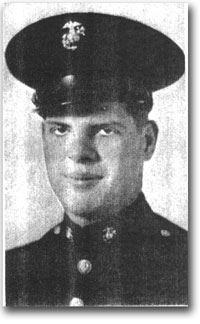 Harvard was assigned to Company E, 2nd Battalion, 5th Marines (Regiment), 1st Marine Division and promoted to Private First Class. He was sent overseas to the Pacific Theater in May 1942. He participated in the Amphibious Landings at Guadalcanal and surrounding Islands on August 7, 1942 - “Operation Watchtower” the first amphibious landings conducted by our Nation during the war, and the first since 1898. Guadalcanal is the easternmost large island in the Solomon Islands chain. The Japanese occupied the island to construct an airbase, to further isolate Australia. Harvard most likely initially landed on Tulagi, and later moved to Guadalcanal.  (Hero George Johnson died on Tulagi, and heroes John Horshock and Leff Yale died in the waters off Guadalcanal.)

Harvard wrote letters home speaking of the ferocity of the action and the treachery of the enemy and confidence that the situation was well in hand.

Private First Class Harvard Fox was killed in action on Guadalcanal on November 2, 1942. The family received a telegram dated November 28th (see below). Harvard was buried on Guadalcanal. In the continually raging battles, there was no luxury of creating a military cemetery, and soldiers were buried in secure areas in hastily marked graves. Michael Toth, brother of Hero John Toth, found both John and Harvard’s grave while serving on Guadalcanal in July, 1943. However, in 1946, the Marine Corps could not positively identify the remains.  Harvard is remembered on the Tablets of the Missing at the Manila American Cemetery in the Philippines. Harvard received the Purple Heart, Presidential Unit Citation ribbon bar with star, American Defense Service Medal, Asiatic-Pacific Campaign Medal, and the World War II Victory Medal. The family received a letter in October 1943, from Private William Wiedemann a fellow Marine from Narberth. He said that Harvard was killed during the “big push”.

“…He was in our company. We used to sit and talk of home a great deal together. We were the best of friends. I would like very much to talk to you personally for I am sure you would be interested in the few things I know about him.”
“…I was not far away from him when he was killed. He was a brave fellow and there wasn’t another fellow I know who had his guts.  He was killed in the jungles while attempting to wipe out a Jap automatic rifle. Two other fellows were hit there. They are still living, but badly shot up. Your son died instantly.  He did not suffer…”

The following excerpt is from a Coatesville Record article written shortly after Harvard Fox's death:

Sad word has been received that Harvard G. Fox, of the United States Marines, lost his life fighting the Japanese on Guadalcanal. It was stunning news. Sharing the sorrow with his loved ones is a sympathetic band of people of this community. We here at the Record have particular reason to regret the passing of young Fox. He worked with us for several months. A finer lad than he never came. He was a hard worker; never shirked a task in the composing room, and his affable disposition made him the real friend of everyone. When the war situation began to look serious for the United States, “Foxxy,” as we called him, was gripped with a patriotic spirit. He recognized the need for young men of his type to enter the armed forces and help America win the war. So, with a smile on his face, he went off to war to do his bit. He chose the hard hitting Marines and in a little while was advanced to the rank of a First Class Private. On his trips back home one could see he was the real soldier and from what he had to say with rare modesty one could understand that he realized there was a big, tough job to be done, and he wanted to have a part in doing it. Fate decreed that Fox go to the Solomons where in the early days of the invasion he rendered a wonderful accounting. His letters were gems. He had a way all his own of composing a letter, and so adept was he at this that not a single work was ever deleted by the censor. “  "We have met the enemy and have the situation well in hand,” he wrote to The Record a few months ago. That he should pay the supreme sacrifice on almost the eve of his twenty-first birthday is to be greatly deplored. But when he went down fighting there is that assurance the enemy must have paid a terrible price. “Foxxy” was a sharpshooter of distinction, having been awarded two medals for his prowess. A hero, he died for his country like so many others. As a find young hero we shall always cherish the memory of his friendship and high degree of patriotism. So long “Foxxy.” 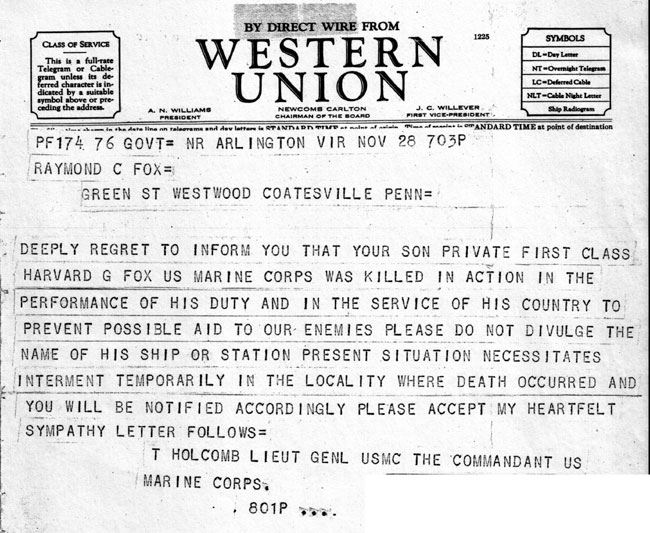