Warren D. Goodwin was born in 1898 and grew up in West Grove, Pennsylvania. He was one of six children.

The Coatesville record printed the following story on September 20, 1945:

A recent issue of the Marine Leatherneck carried the following article, entitled “Gunny’s Goodbye,” on Warren Goodwin, of this city, who died of wounds last February 28 and was buried on Saipan.

“Gunnery Sergeant Warren Goodwin of Coatesville, Pa., had been vehement.

I just want one more campaign, he had said.

“During the first World War, the gunny had served with the famed Fifth Marines in five campaigns, and had been wounded in the last battle of the Argonne. 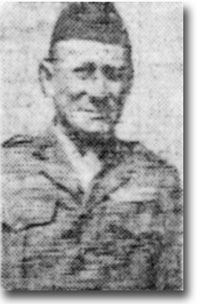 “Between wars, he had been in the army for three years, finally enlisting again in the Marine Corps in February, 1927. He had been stationed first in Nicaragua for three years, and then in China with the Fourth Marines for four years. “Along had come World War II and the Solomons, Gunny Goodwin had been in the initial land party at Tulagi and had participated in the occupation and defense of Guadalcanal.  He went to Guam with the 21st Marines. In February, 1945, his company commander had tried to call a halt, told the old salt he intended to transfer him to the rear echelon. But Goodwin bucked. He explained worriedly that he had just extended his enlistment for two years because he wanted that “one more campaign” so badly. So he got it. It was Iwo Jima.      On the morning of Saturday, February 24th, Gunny Goodwin’s battalion spearheaded the attack on Motoyama Airfield No. 2. He accompanied his commanding officer to a slight promontory to help direct the two assault platoons of his company. There a sniper’s bullet hit him. Gunny was evacuated to a hospital ship and two days later, after 23 years of service, he died. Gunnery Sergeant Warren Goodwin Died of Wounds on February 25, 1945 on board the hospital ship USS Solace AH-5. He is buried at the Honolulu Memorial Cemetery, Hawaii.   Warren was one of West Grove’s Heroes who were honored at a memorial service at the Roselyn Theater on Sunday May 27th 1945.  The Roselyn was located on Evergreen Street and Exchange Place, opened in 1867. The building was demolished in 1980.