Paul L. T. Knight was born June 30, 1924 to Howard and Catherine Knight who then lived in Delaware. His mother's parents imigrated from Ireland. The family later moved to Chester County.

Paul enlisted in the Marine Corps on August 11, 1942 and assigned to the first Marine Division.

His nephew posted the following remembrance on the WWII memorial web site:


Extraordinary heroism in action against enemy Japanese forces at Peliliu September 15-29, 1944. Landed over treacherous coral reef against hostile mortar and artillery fire. Served with the 1st Marine Division. He was Missing in Action, later changed to Killed in Action. The Marines later brought him back to the states. He had full military honors in 1949. He was later disinterred for burial in his home country at the Calvary Cemetery in West Conshohocken. 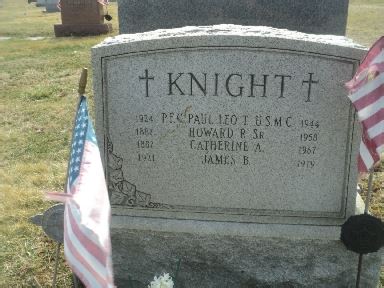