John Pulinka Jr. was born on July 26, 1920 to John and Mary Pulinka who lived in Coatesville, Pennsylvania. John was one of nine children.

John attended Scott High School, where he was a cheerleader. He was a member of St. Mary’s Catholic Church. John was employed by the Coatesville News agency for 10 years. He was in charge of 10 newsboys distributing the evening Philadelphia Bulletin.

John always had a cheap car; he would buy an old car for a few dollars and when it died, buy another. He was finally able to buy a newer car - a 1937 Packard of which he was proud. John obtained employment with Lukens Steel Company after graduation from Scott High School in 1939.

John entered the Merchant Marines on October 31, 1941. Before he left, he made his father promise if anything happened to him, he would use his insurance money to send his youngest brother, Alex, to college.

John was sent for seamanship training in northern Florida. He was assigned to the tanker SS Robert H. Colley as an ordinary seaman in March 1942. The Colley made several coastal voyages, and was later sunk by a German submarine off the coast of North Carolina. 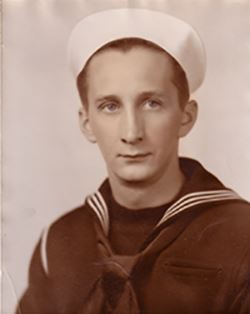 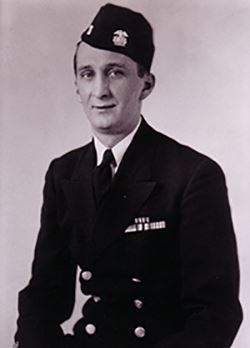 John Pulinka, Jr.John was then transferred to another coastal tanker the SS Olney as an Able Seaman in May.  The Olney was repaired after receiving shell damage from a German submarine which had fired seven torpedoes, all of which missed. John was transferred to the tanker SS Delaware Sun in September, 1942 for a month, then to the cargo ship SS Thomas Sim Lee. The Lee joined a 126 ship convoy to Murmansk, Russia, which endured extremely heavy causalities in the artic waters. Only 26 ships returned to the United States. Upon his return to the States, John was assigned to the USS George Badger, an old WW I era destroyer turned over to the Coast Guard for convoy escort. He served on the Badger for 12 months.  John applied for, and was accepted at the Coast Guard Officer Training School in New London, Connecticut. He graduated with the rank of Ensign and planned to continue in the Coast Guard after the war.

John was then assigned to the SS Paul Hamilton, a Liberty ship, as a Third Mate in March, 1944. The ship was loaded with high explosives and bombs, and embarked 500 troops (154 men were from the 831st Squadron, U.S. Army Air Corps) at Hampton Roads, Virginia. She left on April 3, 1944 in a convoy for Italy via Bizerte, Tunisia, in Convoy UGS-38. On April 20th, off the coast of Algiers, the convoy was attacked by 27 German torpedo and dive bombers. A JU-88 German bomber came in low to attack the Hamilton, gunners on the British tanker Athelchie hit it and the enemy plane caught fire, but it was too late; the bomber launched its torpedo less then 150 feet from the Paul Hamilton. When the torpedo hit, there was a tremendous explosion, flames reached almost a 1,000 feet in the air. The remnants of the ship sank in thirty seconds.There were no survivors. 580 men lost their lives. Hero Frank Famous was one of the troops aboard, and also perished. It was the worst Liberty Ship disaster during the war. Third Mate John Pulinka Jr. was awarded the  Mariners Medal for his service and sacrifice. A memorial was placed at St Celia’s Cemetery in Coatesville in remembrance of John. Four of John's brothers served during the war: Steve, Tech Sergeant Army; George, Merchant Marine; Nicholas, Army Corps of Engineers, and Michael in the Army.

Of the 2,000 Liberty ships constructed, only 2 are preserved in the United States: the Jeremiah O’Brian stationed in California, and the John W. Brown in Baltimore. The John W. Brown offers a couple of day long cruises each summer, with food and period entertainment.