George Bush was born on November 23, 1918 and lived with his family in Elverson, Pennsylvania.

The Navy supplied Pharmacist Mates to the Marine Corps and George was one of those from the Navy assigned as a  Marine Corps medic. The Marines called them “Medics” although they had more extensive training than Army Medics.

Pharmacist Mate 3rd Class George Bush was Killed In Action on Iwo Jima on March 20, 1945. Even though he survived the most intense battles which began with the landings on February 19th, the Island was considered relatively secure and victory declared on March 16th, four days before George was Killed In Action. George Bush was buried at the Honolulu Memorial Cemetery, Hawaii, with full military honors. 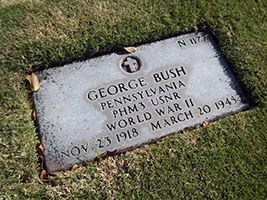