George W. Dobson Jr. was born on July 29, 1924 to George and Gertrude Lacy Dobson who lived in Spring City, Pennsylvania. George was one of ten children.

The family later moved to Phoenixville. George Jr. attended the Locust Grove School, and later obtained employment at the Wheeler Dairy. He became a member of St. Peter’s Episcopal Church.

George enlisted in the Navy on July 7, 1942, His brother, Donald, remembers the day his brother went into the Navy. They ate ice cream on his front porch. That was the last time he saw him.

The Suwannee was originally a tanker AO-33 commissioned in 1939. She and three of her sister ships were converted to auxiliary aircraft carriers of the Sangamon Class, which later were designated as Escort Carriers. The US constructed over 100 escort aircraft carriers during WWII. They then served as convoy escort, antisubmarine groups, ferrying aircraft and aircraft ground support. They were not first line carriers, but served to augment a few large carriers until more were constructed. They then  served in support roles only, because of the slow speed and small aircraft compliment. 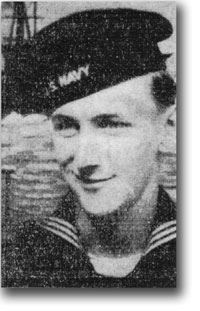 The Suwannee embarked from Hampton Roads, Virginia with the large carrier USS Ranger CV-4, landing in North Africa in late 1942. The shipwas part of the Central Attack group, whose target was Casablanca, Morocco. They provided air support for the landings as well as antisubmarine sorties. The ship’s aircraft flew 255 sorties between November 8-11th, losing 5 aircraft. They also sunk an enemy French submarine, trying to escape. George’s ship transited the Panama Canal in December to head for the Pacific Theater of Operations. The Suwannee then provided air escort to convoys that supplied the battered but steadfast Marines on Guadalcanal for seven months. In November, 1943, George's ship provided air support for the  Gilbert Island landing on ‘Bloody Tarawa’ in November. They participated in the Marshall Islands campaign (Kwajalein, and Eniwetok) in January, 1944, and the Hollandia landings on New Guinea by shuttling replacement aircraft to the larger fleet carriers in April.   In June, the Suwannee supported the landings on Saipan and Guam in the Marianas and drew first blood in the Battle of the Philippine Sea when she sunk the Japanese submarine I-184 on June 19th. In October, George’s ship supported the US return to the Philippines by landing on Leyte Island on October 20, 1944. The Japanese reacted with a complicated plan for the Naval Forces, involving a decoy force to draw away Halsey’s fast fleet carriers and battleships, and three fleets flanking our forces to destroy the unprotected troop transports and cargo ships. The result was the Battle of Leyte Gulf, the largest naval battle in history. The battle covered 100,000 square miles, involved 200,000 participants and six battle fleets on October 24-25.  The Japanese plan almost worked, as a battle fleet snuck through and spotted the escort carriers with only destroyers and destroyer escorts to protect them and the transports. The attack of these escorts and the escort carrier aircraft returning (most without bombs and low on fuel) against a Japanese battleships, is vibrantly described in James Hornfischer’s “The Last Stand of the Tin Can Sailors . George’s ship was in “Taffy 1” further south of Taffy 3 which was involved in the running surface battle. But danger came from another quarter - the first kamikaze attacks of the war at 7:40 a.m. on October 25th. Suicide attacks were yet unknown and completely surprised the crews of the American ships. The first kamikaze hit a sister ship, the USS Santee CVE 29. The antiaircraft gun crews destroyed the next two and damaged a third, which rolled over and  smashed into Suwannee opening up a 10-foot hole in the flight deck into which the aircraft’s bomb exploded opening the hole to 25 feet and causing a number of casualties. Aviation Mate 3rd Class George Warren Dobson was Killed In Action on October 25th by the kamikaze. His parents were notified of his death on November 11, 1944. George is honored on theTablets of the Missing and Buried at Sea at the Manila American Cemetery. George’s brothers, Harry and Frank, served in the Army Air Forces during the war.  His brother, Donald, served in the Air Force for 30 years, including service in Vietnam. Hero Henry Morrison, also an AMM 3c was killed in the same battle on the USS Princeton CVL-23 the same day but hundreds of miles north. Hero Emidio Falini was there in Leyte Gulf, but survived until the next battle.