Richard Van Derlyn LaRue was born on January 23, 1918 to Mr. and Mrs. Raymond H. LaRue of Malvern, Pennsylvania. His father operated the Malvern Pharmacy and was known as a community leader in town.

Richard graduated in 1936 from Tredyffrin-Easttown High School. He was very active in school, serving as class vice president his junior year, and president his senior year. Richard sang in the school chorus and was a member of the Glee Club senior, and starred as the "Captain" in the school's production of HMS Pinafore. He had a fine scholastic standing, and was known as a friend to all.. Richard was described in his yearbook as "...always bears a great deal of responsibility willingly" and "...likes to be of service to everyone" - foreshadowing his heroic service to his country.

After graduation, Richard attended the Philadelphia College of Pharmacy. He graduated in 1940 and began working at De Haven's Drug Store.

Richard enlisted in the Navy Reserve in 1940 and received the rating of Pharmacist Mate First Class. Navy pharmacists (sometimes called Corpsman) served on ship and shore with the Navy and Marines and with Army troops when they were embarked on Navy ships. They were trained to treat common medical problems as well as trauma, and were similar to today's physician's assistants. 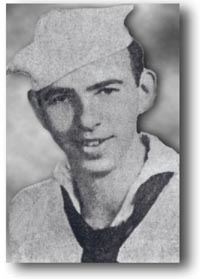 Richard was called to active duty in November, 1941. He received training at the Philadelphia Naval Hospital, with additional medical training at the New London Naval Base hospital. He was then sent to Norfolk, Virginia for intensive training with amphibious landing forces. Before leaving for overseas,Richard was engaged to Laura Moore of Glenside. Richard was assigned to the USS Joseph Hewes, AP50. The ship, formally the merchant Excalibur, was acquired by the Navy and converted as a troop transport. The ship was named after a signer of the Declaration of Independence from North Carolina, who was instrumental in securing a commission in the Continental Navy for John Paul Jones. The ship departed in October for the amphibious landings in Nazi-occupied North Africa. Richard went ashore under intense fire to treat the wounded and to transport them back to his ship. The ship was torpedoed by a U-boat on November 11th, Armistice Day. While the ship was slowly sinking, Richard evacuated the wounded into the water. The USS Takser H. Bliss Ap-42 Bliss rescued Richard and the wounded from the water. After 72 hours of working to save others, Richard was ordered to eat and to rest. While he was in the mess hall, the SS Bliss was torpedoed and the mess hall was demolished in the explosion. Richard LaRue died on November 12, 1942. Richard's name is listed on the Tablets of the Missing at North Africa American Cemetery Carthage, Tunisia. Richard received the Purple Heart posthumously. His parents received the following citation for meritorious service as a member of the beach party signed by Admiral Jonas Ingram, the Commander-in-Chief of the U. S. Atlantic Fleet:

When beached landing craft in the vicinity of Fedala, French Morocco, were subjected to continuous enemy artillery fire and intermittent bombing and strafing attacks by enemy aircraft, Richard Vanderlyn La Rue, unassisted, transferred casualties from the beach to medical evacuation center and returned immediately to the combat area to assist in the handling of other casualties, and in the administration of necessary first aid measures. During the remainder of the period spent in the landing zone, LaRue worked incessantly unloading vital medical stores and in treating casualties. The exceptionally praiseworthy performance of duty by Richard Vanderlyn LaRue under hazardous condition reflects great credit upon the U. S. Naval Service.