Arthur Anderson Steinmetz was born on July 5,1919 to Arthur and Bertha Cox Steinmetz who resided in West Chester, Pennsylvania. Arthur was their only child.

When Arthur was nine years old, he submitted a story for a contest held by Better Homes and Garden magazine, and won. The story was about his dog:

My daddy found ‘Gyp’ one night on the front seat of our sedan shivering from cold and hunger. He is just a little mongrel terrier but he is very smart and mother says he can do everything but talk. 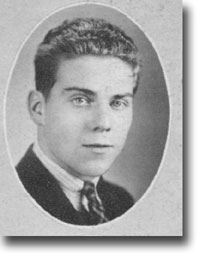 Last summer the Playground Committee had a pet parade in the park and I took ‘Gyp’.  I gave him a bath first and mother tied a big blue bow on his collar and another on his leash and we got in line. I am sure ‘Gyp’ wanted to do the best he could because he loves me of being a kind master. He walked all the way with his head up and was so well behaved the judges gave me first prize, which was a fine flashlight. I certainly was proud of my pet.

Arthur graduated from West Chester High School in 1937. Arthur’s family had just moved to Olympia, Washington, where his father had become the manager of a plant owned by the Jacob Company of West Chester. The Jacob Mushroom Company was a division of Grocery Products Manufacturer Corporation then headquartered in West Chester. The family later returned to their home in West Chester when his father was employed by Concord Foods Company. After graduation Arthur left West Chester to join his family in Washington. He then attended Washington College in Olympia where he studied aviation. The Civil Aeronautics Association choose him to be given further instruction in the aeronautics; handling of aircraft and control and maintenance. He was one of 150 selected from 600 students in Washington, Oregon and California. Arthur received his pilot’s license in 1939, and continued his training with the CAA until January, 1941. In February, he enlisted in the Navy at Sandpoint, Washington, one of the larger Naval Stations on the West Coast, and then was sent to Pensacola, Florida for Naval Aviation training, received his wings and a commission as Ensign. He was sent to Squantum Naval Air station, outside of Boston where he was trained as an instructor. He was then sent back to Florida to train new pilots. In January, 1942, Arthur was sent to New England where he flew patrol missions over the Atlantic. He was promoted to Lieutenant (J. G. - Junior Grade).  The Navy accepted a new type of Patrol Bomber, and Arthur was sent to Burlington, Vermont to study and train on the aircraft. After completion, he was sent back to Florida. On a patrol mission in June over the south Atlantic, Arthur’s aircraft failed to return. A telegram was sent to his family stating the aircraft with a crew of  five failed to return to its base and was presumed lost. The telegram further informed the family that all efforts are being carried out to locate the men and the ship and search the islands near its path, however no radio messages were received, nor was any trace of the aircraft or crew found.  Lieutenant Arthur Anderson Steinmetz was killed in action on June 21, 1943. A memorial service was held at his base on June 27, 1943.